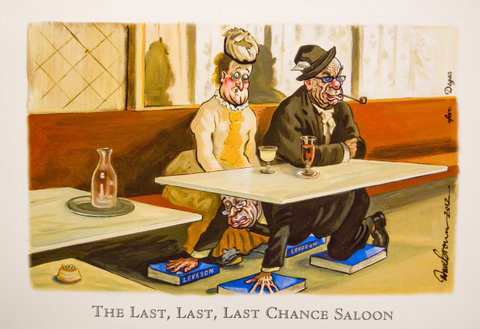 On 4th December we hosted The Political Cartoon Society’s annual awards. The UK’s leading cartoonists from all the national press gathered to celebrate and commiserate with the winners and losers.

A cartoon by The Independent‘s Dave Brown was named Political Cartoon of the Year 2012. The cartoon, ‘The Last, Last, Last Chance Saloon’ shows David Cameron’s response to Lord Leveson’s report. The cartoon was inspired by a painting by Degas.

The award, presented annually by The Political Cartoon Society, was voted for by the society’s members together with the cartoonists of all the national newspapers. Below are images of some of the cartoons displayed and the evenings celebrations.

View all past exhibitions >